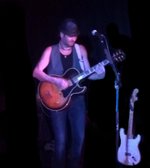 Creator and founder of the project, Tiziana is passionate about rhythms. Her stage career started as a flamenco dancer (1995 to 2004), where she discovered the cajòn, originally a Peruvian instrument adopted by the flamenco tradition. Subsequently devoting herself to the congas, she studied at the École de Jazz et Musique Actuelle in Lausanne, where she was inspired to harmoniously combine the two percussion instruments in the rock project KILIRADIO. Tiziana brings a particular touch to their musical style, intensified by her deep and interpretative voice.

Band co-founder, Oliver has always been passionate about the guitar since he was a teenager. After experimenting with various musical styles, he enrolled in the École de Jazz et Musique Actuelle in Lausanne. In the 90s, he played solo guitar in the blues band Jesse James & The Gangsters, selected for the opening act B.B King’s concert in Lugano in 1992. Prolific songwriter, he enriches their style by his deeply captivating and charismatic voice. Currently he teaches music at the Yverdon Conservatory.

Versatile musician, multi instrumentalist. Leader of the band Treesize as singer and guitarist, Max boasts collaborations with renowed artists such as Rossana Taddei, songwriter from Uruguay. He worked with Raissa Avilès, in her Mexican folk project, and Francesco Pervangher, pop songwriter from CH-Ticino. Seasoned musician at ease with various styles both as a guitarist and bass player, Max is greatly valued and appreciated all round.

Greatly appreciated, not just for his extreme resistance (!) but also for his joyful symbiosis with his instrument – simply fascinating to witness!

CH-Lausanne is the meeting point of the unbreakable founder duo, coming from South of Switzerland, backbone of the band : Tiziana Ghiringhelli (vocals-percussions) and Oliver Frei (vocals-guitar).

Loved by the public for their empathetic and communicative musicality and peppy interpretations, KILIRADIO is selected for the musical competition TicinoBands Live Contest 2015 and arriving all the way to the final.

This prize encouraged them to record Feathers & Stones, album with 11 new original songs, giving way to plenty of concerts.

In spring 2017 single release, Beautiful Thing (I miss you), in a sunny funky-rock style, immediately loved by radio stations !

The band is now working on their next album, so STAY TUNED !

2017 Single Beautiful Thing (I miss you), with Official Videoclip 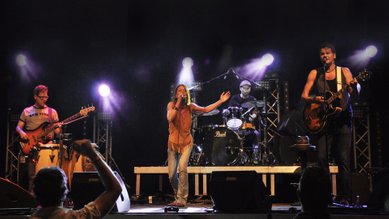